Behind the Scenes @ UCF

This is the Soundslide project I created with Brentley Romine for our final project. It’s a look into some of the people who do maintenance around the UCF main campus that not many students notice. Click on the picture to view. 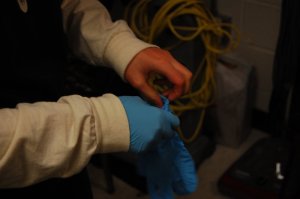 Here is the video project I created for class with Austin Castle. It’s about a couple of Central Florida’s local farmers and a few local restaurants that serve their organic and hydroponic food.

Apparently there is a thing that exists called “Banned Books Week” which was from Sept 24-Oct 1 this year. During this 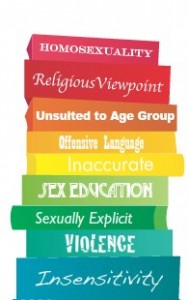 week  The Huffington Post created an interactive infographic to demonstrate the 10 most banned or challenged books of last year. It says there was a total of 348 attempts to remove material from a library. This is an interesting topic to me because I’ve always loved reading and remember discussing with teachers in high school why certain books should or should not be censored.

I think they created a really easy to use infographic. You can choose the way you want to receive information; you can view books by the reason people wanted to censor them or by book. It’s color coded so it’s easy to make correlations. I also like that if you click on the book it gives you a short excerpt of text from the book for you to see for yourself the type of material printed in the books that are in question. The only piece of information I wish I had gotten from this infographic is how many people wanted to ban which books in particular. I don’t know if they didn’t have access to that information or what but adding that information would definitely add positively to the graphic.

The Power of Music

I found this video on a blog called Multimedia Shooter. This is a short story about a veteran, Jack Leroy Tueller, and an experience he had two weeks after D-Day during World War II. He explains how playing his trumpet touched the heart of an enemy. It’s really a heartwarming story that shows the human side of war.

I think the video is done perfectly. It’s short, sweet and to the point. It’s full of emotion; there are some great close ups on the eyes which really conveys emotion strongly. It’s narrated by Jack which is fine because it’s his story to tell and he does a great job.  The camera angles used vary from close-ups on all the decorations on his uniform to side views of him playing the trumpet, but the camera stays on Jack the whole time and you don’t get bored.  I love that you actually hear the song that he played that night many years ago and you can understand how that could make someone feel. I wish there were more war stories out there like this one.

Play Me, I’m Yours

I’m so glad I stumbled upon this video on Time magazine’s website because it made my day. This is a really neat video capturing the artist Luke Jerram’s project 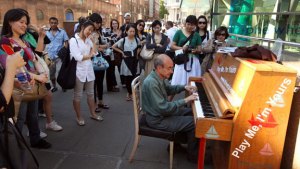 in New York City. This guy placed 60 pianos that say “Play Me, I’m Yours” throughout New York City this past summer as part of a public art project.

I thought this video was done very well. The audio was clear and the interviews were compelling with interesting subjects. I like that they overlay text at the beginning of the video to explain what you’re seeing. I only wish they had expanded on the text that said “So far, 167 pianos have appeared in eight different cities worldwide”. I’d like to know if that was the doing of the artist or if this project has taken on a life of its own. I love that they show people from all walks of life enjoying the public art and the human interaction it has caused in the city. The interview with the author lets you know where his idea came from and how he was trying to create more interaction between people who are in the same area on a daily basis but ignore each other. I like that they overlay text to tell you where the certain pianos that you are seeing are located in the city. This project has a lot of different emotions in it and it warmed my heart. 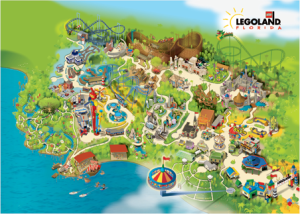 I found this piece of multimedia journalism on The Lakeland Ledger’s website where I was doing some research for the  internship fair on Monday. I haven’t been to Legoland yet and wanted to check out what they did with the old Cypress Gardens which is what drew me to this video.

This is a different approach to video journalism; it’s almost broadcast in nature. It’s a behind the scenes sort of piece where you get to see the reporter ride this new roller coaster at the park. While you don’t get to experience the coaster (they don’t strap the camera to the ride) you do get to see what the ride is like without actually being at the park. The video shows the track and the progression of the ride which is exactly what I want to see. The reporter also gives you a comparison to other coasters and sums up the ride in layman terms which is awesome. The audio and video quality is a little on the poor side but it’s raw and I like what they did with what they had. My main critique is the last thing the report says doesn’t really make sense and made me laugh. He says, “I really enjoyed it and you are too.” I think he means “you will too” but it’s just funny to see other reporters as humans who make mistakes sometimes too.

This piece of multimedia journalism 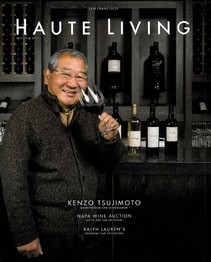 combines two of my loves: video games and wine. This short report is about Kenzo Tsujimoto who is the CEO of Japan’s Capcom who created games like Street Fighter that I still enjoy playing on my Super Nintendo. The report is about how Tsujimoto is trying his hand in the wine growing game now. He’s starting out charging $80 and up for his wines. Now i’ve never tried his wines but just from a consumer point of view I think that’s a little high of a price to begin trying to sell wine for. I think it’s interesting that most of his product is exported to Japan.

I think the video was visually interesting. I like that they start the video by entering the vineyard. The reporter begins with narration, well the whole video is narrated, but I think it’s kind of necessary. Tsujimoto needs a translator to be understood so having his voice as the main source of information would have made things confusing. The video shows the action on the vineyard of the workers harvesting the grapes. They use an extended shot while they are driving in the car and while there is no action it gives you a good perspective of how large the vineyard is.